Hi, I am glad to announce the arrival of OpenSprinkler Pi (OSPi) 1.0 — a sprinkler or irrigation extension board for Raspberry Pi that provides direct access and control of sprinkler valves. This post serves as a quick introduction to the hardware and software setups. A more dedicated webpage will be available soon. First off, a picture of the board: 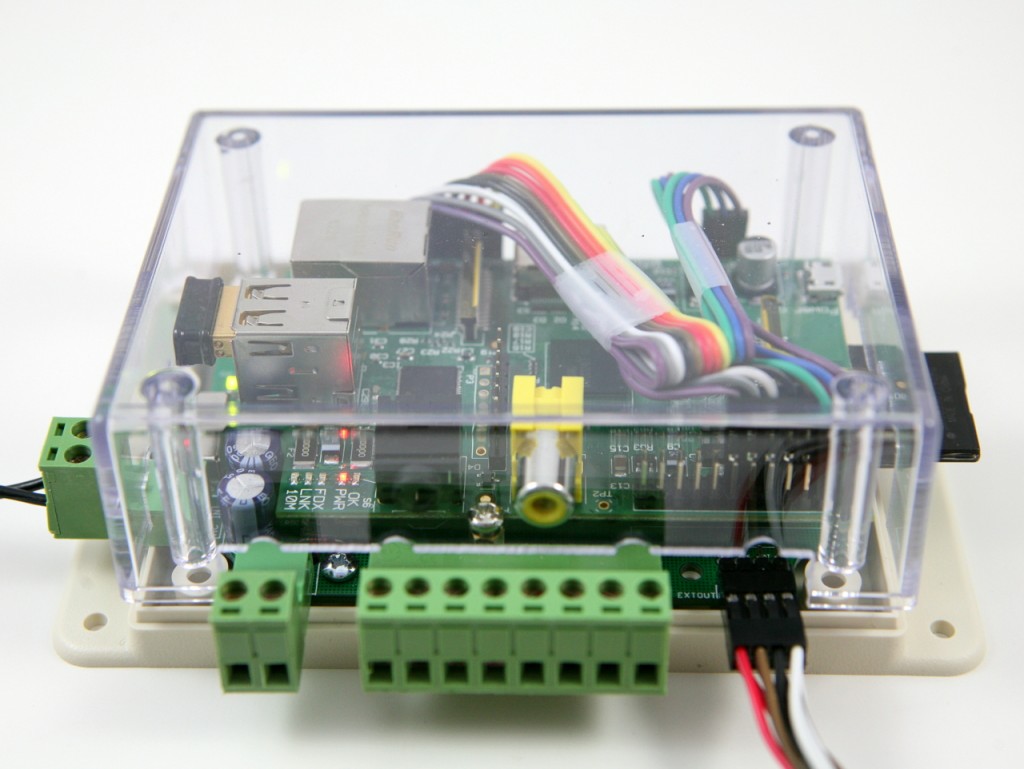 and a video introduction:

Since the beginning of Raspi, there have been many published DIY projects on how to use Raspi for home automation need. I bought a Raspi a few months ago, and have been quite happy with it since then, but I at that point I had not thought about designing an OpenSprinkler extension board for it. The idea of OSPi first came when I noticed that several OpenSprinkler users were setting up Raspi to work with OpenSprinkler. There are many good reasons to do so, for example, to enable logging, to customize the default Javascript files, and to allow more advanced features such as weather-based and learning-based control. At one point I started thinking: wouldn’t it be nice to design an extension board for Raspi, so that it can directly talk to sprinkler valves through the GPIO pins, without an additional layer of microcontorller and Ethernet controller? This has been on my todo list for quite a while, until one day I was playing with Raspi, and I suddenly that the I can actually fit a Raspi inside the existing OpenSprinkler enclosure. As soon as I figured this out, I couldn’t resist ordering a small batch of prototype PCBs right away.

The content below has been updated and moved to a dedicated product page for OSPi at http://pi.opensprinkler.com.

Amid all the fun and exercise of snow shoveling following the heavy snowstorm Nemo, I was able to finish and check in a new firmware update for OpenSprinkler. This new firmware, numbered 1.8.3, is a relatively minor update. You don’t have to update if you don’t need the new features explained below. There are two main changes:

The first is adding back the Sequential option that was available in firmware 1.7 but disabled in 1.8 due to a bug that was tricky to fix. This option allows you to set the controller to run in either sequential mode (where station runs are serialized) or concurrent mode (where stations are allowed to run simultaneously). The support for this option is now added back (with the bug fixed), and the Program Preview Javascripts have also been updated so you can easily check and verify the controller schedules in concurrent running mode. For most people this is probably not that useful, because sprinklers are typically set to run sequentially to maintain water pressure (similar to how people in the same house usually take showers in turn!) But there are times when you may need to run stations in parallel, say, if you want to speed up the overall watering time, or if you want to run master stations in a non-conventional manner, or if you want to use OpenSprinkler to control not only sprinkler valves but also home lighting and other devices. These are all cases where station runs have to overlap with each other. If this feature is useful to you, go ahead and upgrade to 1.8.3.

The second change is a new Device ID option which assigns the last byte of the controller’s MAC address. This new option allows you to run multiple controllers on the same network by giving each controller a different MAC address. Note that OpenSprinkler uses a software MAC, and is programmed with exactly the same MAC on every unit. I know, this sounds lame, but it’s just because I haven’t spent any time to figure out how to flash a random MAC address. Since most users won’t have more than one controller on the same network, it is not a serious issue. With the Device ID, you can easily customize the MAC address, albeit only the last byte. So again, if you find this feature useful, go ahead and upgrade to 1.8.3.

There are a couple of other minor changes. For example, the network status icon has been removed, instead, the LCD now displays no status icon if the network is on, and a question mark if the network is lost. Also, the Run-Once Program data is not stored in EEPROM any more; instead, you have to type in the water duration each time you start the Run-Once program. I know, this sounds a bit inconvenient, but I had to do it to make space for the new features. If you want to upgrade to 1.8.3, please follow the Firmware Update Instructions.

A slight annoyance I found recently is that I couldn’t compile the OpenSprinkler source code any more on my upgraded OS — Linux Mint 14. It turns out that Mint 14, based on Ubuntu 12.10, installs avr-gcc 4.7.2 by default, which apparently broke some of the Ethernet library code. This is quite annoying. My temporary workaround is to install Linux Mint 13 (based on Ubuntu 12.04 and installs avr-gcc 4.5.3 by default) on a VirtualBox in the host system, and then I can compile the code again in the virtual OS. I haven’t found an easy way to downgrade avr-gcc 4.7.2 to 4.5.3, so I will just stick to this option for now. Apparently next time I should really transition to use Arduino 1.x, which comes with its own avr-gcc compiler so I don’t have to worry about the OS installed avr-gcc breaking old code.

OK, that’s all. Back to snow shoveling tomorrow!