While playing with my ESPToy today, I discovered a rather bizarre issue. The symptom is that some ESP8266 (the ESP-01 version) modules became very hot to touch. In fact, a couple of them started smoking, and the red indicator LED started burning away! Shocking. What’s even more shocking is that these modules continue to function, as if the chip isn’t bothered by the magic smoke at all…

Not all of them have this mysterious problem. So what the heck is going on here? After some digging, I found that on the problematic ones, the tiny resistor next to the red power LED measures only 4.7 ohm?! This can’t be right. This resistor is a clearly a current limiting resistor for the LED — the LED and the resistor are connected in series between VCC and GND. A 4.7 ohm resistor means the current flowing through the LED would be somewhere around (3.3V – 2.1V) / 4.7 ohm = 255 mA! (2.1V is the typical forward drop voltage of red LED). No wonder why the LED (or resistor, or both) is smoking! Phew, that really scared me. To double check, I also measured this resistor on the good ones — they all measure 4.7 kilo-ohm. That’s about right. So clearly the manufacturer has made a mistake and this is really unfortunate. I’ve shot a video of the smoking ESP8266. See below. 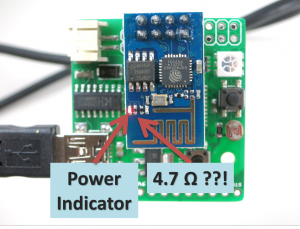 Anyway, because some of these defective modules are shipped with the ESPToy, if you’ve bought ESPToy the past few days, you may end up getting some of these units. I sincerely apologize for this. It’s not anything I’ve anticipated. There are several options to solve the issue:

Well, this is just one of those headaches to deal with when buying goods from China. To be fair, we buy only from reputable sellers, even so, issues can happen, but we do gain more experience each time a lesson is learned 🙂