First off, my apology for not updating the blog for a while. Right after the Bay Area Maker Faire on May 18 and 19, I went to a trip to the UK for about ten days. Then as I came back, I was faced with a load of orders that need to be processed immediately. My friend Don and I spent three days non-stop shipping out packages. Now that all the back orders have been processed, I finally felt relieved and can come back to take care of the blog.

As a quick summary of the 2013 Maker Faire: we had a great show. A big thumb-up to Aaron Newcomb for helping me out. Without him, I would not have made it to the Maker Faire. Lots of people came by, chatted with us, provided valuable comments and suggestions, and expressed appreciation and love 🙂 I took pictures with Chris Anderson, and Eben Upton and Liz Upton. I also met and chatted with Laen from OSH Park, Ian Lesnet from Dangerous Prototypes, Mark Frauenfelder (Editor-in-Chief of the Make Magazine), Jason Babler (Creative Director of Maker Media), Michael Caster from the Maker Shed, and many others. This is such a fantastic event, and a great opportunity to meet and make connections with other makers. 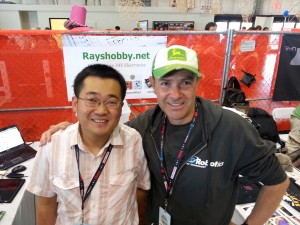 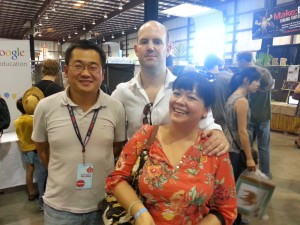 This year we didn’t bring many physical goods sell at the Maker Faire, but instead directed people to place orders online. This way we can devote more time to talk to people. Two interesting things I learned this year: First, AASaver is surprisingly popular and received much interest, but unfortunately I didn’t foresee this and hence did not prepare any new stock. What a pity! If I end up going to the New York Maker Faire later this year, I will make sure to take a batch of AASavers there. Second, kids really enjoy playing with flashing LEDs. We’ve set out a table with coin batteries and self-flashing LEDs, and provided simple instructions to make an LED throwie so people can make one right at the booth and take it away as a gift. This was hugely popular, and all the LEDs and batteries were consumed in no time. Apparently I should prepare more of these next time!

Of course the primary focus of the audience at our booth is on OpenSprinkler and OpenSprinkler Pi (OSPi). Since the release of OSPi just a couple of months ago, it has started gaining significant interest and has become the fastest growing product on my site. So far there have been more than 350 OpenSprinkler Pis out there in the wild. And as you can see from the forum, lots of people have been keenly working on developing their own software, using different programming languages and implementing advanced features such as weather-based control and sensor-based control. As I will talk about in the next post, the same firmware that’s running on the microcontroller-based OpenSprinkler has now been ported to OSPi, thanks to the generous contribution by Kimberling. So now you can run the same full-featured interval program on OSPi as in the standard OpenSprinkler.

But if you think the microcontroller-based OpenSprinkler is losing its charm, you couldn’t be more wrong 🙂 Although not growing as fast as OSPi, it’s still selling extremely well. Anyone who recently ordered the assembled OpenSprinkler has probably found out that we’ve been `secretly’ upgrading your order to a pre-release version of OpenSprinkler 2.0. As I will talk about in a follow-up post, OpenSprinkler 2.0 has an upgraded mcu (ATmega644), microSD card slot, the ability of adjusting LCD backlight brightness and contrast, more available pins to interface with external sensors and actuators, and pin headers to directly plug in an RF transmitter in order to interface with remote devices. The only difference of the pre-release version with the final version of 2.0 is in the enclosure design: the pre-release uses the current enclosure, and the final version (which is in production at SeeedStudio) will be using the new injection molded enclosure. There are many good reasons to prefer the microcontroller-based OpenSprinkler over OSPi: it is pre-flashed and works out of the box, so no hassle with installing raspbian, doing ssh, or dealing with Linux; it has LCD, buttons, and a number of analog pins to interface with external sensors; also I personally really like microcontrollers because of their simplicity and the fact that the controller is instant on when you need to restart it.

Uhh, I think my thoughts are already drifting away from the Maker Fairem which is supposed to be the focus of this post. So let me conclude this post here, and more exciting posts about recent updates will follow next!