As you’ve probably heard: the Raspberry Pi Foundation recently released RPi A+, which is the first RPi that’s smaller in size than any other RPi. It is essentially a B+ with less memory (256 MB vs. 512 MB), one USB port (instead of four), and a compact form factor (65mm vs. 85mm). Not only is it smaller, but it’s lighter, consumes less power, and best of all, it’s cheaper — only $20!

There is a famous Chinese saying: “A sparrow may be small but it has all the vital organs”. This is exactly what I feel about RPi A+. Although it’s almost 25% smaller than any other RPi, it retains all the essential features. Similar to B+, it has a microSD card slot, and hybrid audio / composite video port. This helps reduce the overall size of the assembly. It doesn’t have a built-in Ethernet controller and connector (which contributed to the lower price tag), but most people will likely use a USB WiFi dongle anyways so it’s not a big loss. What’s clever about its design is that it’s pin compatible with B+ — in fact it’s basically B+ with 20mm chopped off from the right edge. All the connectors, pin headers, screw hole locations are exactly the same as B+. This means any shield / extension board that works for B+ is likely to work for A+ with no modification.

Such is the case with OpenSprinkler Pi (OSPi) — the B+ version works perfectly fine for A+. Below are two pictures showing OSPi v1.4 (B+ version) with A+ installed. As you can see, it leaves extra space on the right-hand side to fit additional components. 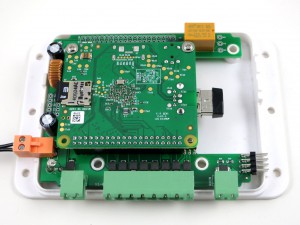 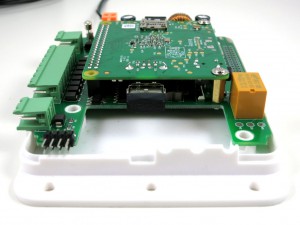 As you may have guessed: given the extra space, the first components I will consider adding are three pushbuttons. This makes a lot of sense. So far OSPi has been using the same enclosure as the microcontroller-based OpenSprinkler. Because the enclosure is unfortunately not tailored to OSPi, there are several cutouts left unused, such as the pushbutton cutouts, Ethernet, LCD, USB, and power switch. With the extra space on the right, pushbuttons are the easiest to add back. Ethernet controller and connector can also be added, although as I said above I am not sure how useful they are, since most people would probably prefer using USB WiFi dongle.

LCD is another popular feature that has been requested. This is a bit tricky to add because there is simply not enough space in height to fit a standard 1602 LCD like the microcontroller-based OpenSprinkler. However, I’ve got a wild idea that I think is going to work. If this is feasible, then OSPi will truly look just like the microcontroller-based OpenSprinkler. I will post an update as soon as my idea is verified. Stay tuned!